This year’s Aspen Annual conference The Shape of Central Europe, organized in cooperation with the Economia Media House, took place on 22 November at the Prague Crossroads.

The aim of the conference was to thoroughly evaluate the political, economic and social development of the Czech Republic in the context of Central Europe. We have built upon the successful years of the past and focused once again on an analysis of five key areas: competitiveness, quality of governance, education, defense and security and quality of life.

The comprehensive study of our expert groups has traditionally highlighted the most serious problems in individual areas. The results of the research in the five panels were discussed by figures from politics, business or academia. At the end of the conference, as always, we prepared a summary of the most pressing issues in the given areas and a draft recommendation addressed to those who decide on the future of the Czech Republic.

The video presentations of the panels are available here:

The conference was opened by Ivan Hodáč (Aspen Institute CE), Zuzana Řezníčková (Economia Media House) and finally by Dan Porterfield (The Aspen Institute, US). Mr. Porterfield made reference to the life and work of Madeleine Albright and Václav Havel. He emphasized the importance of the values that Aspen promotes world-wide, such as leadership and democratic principles, and closed his speech with a message that dialogue must lead to action, and action must lead to impact, thus both words and deeds are needed.

It was an honor to speak at @AspenInstCE's #AspenAnnual conference in Prague last week. A few of my thoughts on the role that the @AspenInstitute can play in halting the spread of authoritarianism and promoting democratic values are in the thread below… https://t.co/lFB65Vy3lB

This was followed by a keynote on digital opportunities by Nicklas Lundblad (Google), who introduced the opportunities that digitalization can bring. He spoke about the new growth models that will be needed in Europe and the importance of a tighter interconnection of markets. Last but not least, he highlighted areas in which technologies can not replace the human factor and declared that “learning is the new fitness”.

Very happy to be speaking at #aspenannual in Prague today about digital opportunities. Economic, entrepreneurial and – most importantly – human opportunity can not only add 200 BUSD to CEE economy by 2025, but will also transform quality of life. pic.twitter.com/BiUgRxRrO8

The panel discussion led by Michala Hergetová (Czech Television) elaborated on the steps needed for the improvement of competitiveness. This discussion included topics such as the education system, public administration, digital transformation, the importance of technological innovations, the rigid labor market or the lack of cooperation between the public and private sectors. The initial presentation was prepared by David Vávra (OGResearch) and discussed by Vladimír Bärtl (Deputy Minister of Trade and Industry), Tomáš Karakolev (McKinsey),  Ondřej Vlček (Avast) and Michal Skořepa (Ceska sporitelna). Despite extremely low unemployment figures, there is still a great deal of room for improvement. The distinguished speakers addressed the issue of one million people being in debt. The panel agreed that it is essential to focus on disadvantaged groups rather than providing benefits for people, who simply refuse to work. The panel also covered more topics such as gender inequality, investment incentives or the flexibility of the existing workforce.

The second panel consisting of the distinguished speakers Vladimír Dzurilla (PM’s ICT Advisor), Péter Krekó (Political Capital) and Matěj Petrásek (DigiLion) began with a presentation by Karel Šimka (Supreme Administrative Court). The discussion elaborated on digitalization and all the challenges which accompany it, such as corruption, data handling by state and private companies, or the imposed pressure on digital companies by states, concerning the struggle against fake news.

The hyperoptimistic era that we have seen in the early years of the century is over. Let’s develop a healthy suspition towards the government. Don’t forget that the deep-fakes age is coming @peterkreko #AspenAnnual #AYLP pic.twitter.com/GWD1IBiUC2

The speakers consequently expressed their convictions about the need for ongoing cooperation within the public administration in order to create quality digital services. It was stated that it is important to differ between necessary and unnecessary processes that should be digitalized. The process of digitalization from the United Kingdom was used as an example for the Czech Republic. Last but not least, the budget for digital technology development, as well as protection against cyber-attacks, etc, was a point of discussion.

A discussion, based on a study by Bohumil Kartous (EDUin) which assessed education, was followed by a fruitful debate between Robert Plaga (Minister of Education), Zsuzsanna Mátrai (Microsoft), Jiří Nantl (CEITEC) and Michal Pěchouček (Czech Technical University). The most pressing issues identified were the under-financing of the education system, the gap in the quality of education between regions, the low attractiveness of the teaching profession or the lack of teachers. The debate expanded on the evident lack of engagement by parents in the education of their children. This passivity could have resulted in the government failing to prioritize the education system above other things and being satisfied with the average condition of the Czech education system.

A lively debate emerged when the distinguished panelists discussed public and private schools, as well as the insufficient openness of the system to people from the working world. Opening the education system up to professionals outside the education system can only be of great benefit. One of the quicker solutions might be targeting the positions of directors who should primarily be qualified pedagogical managers.

The conference proceeded with a debate on the lack of consensus as to what threats governments should primarily focus on. The study on Defense and Security was organized by Tomáš Pojar (CEVRO) and discussed with the panelists Jakub Landovský (Deputy Minister of Defense), Gen. (ret.) Petr Pavel and Jan Lipavský (MP, Parliamentary Committee on Defense). 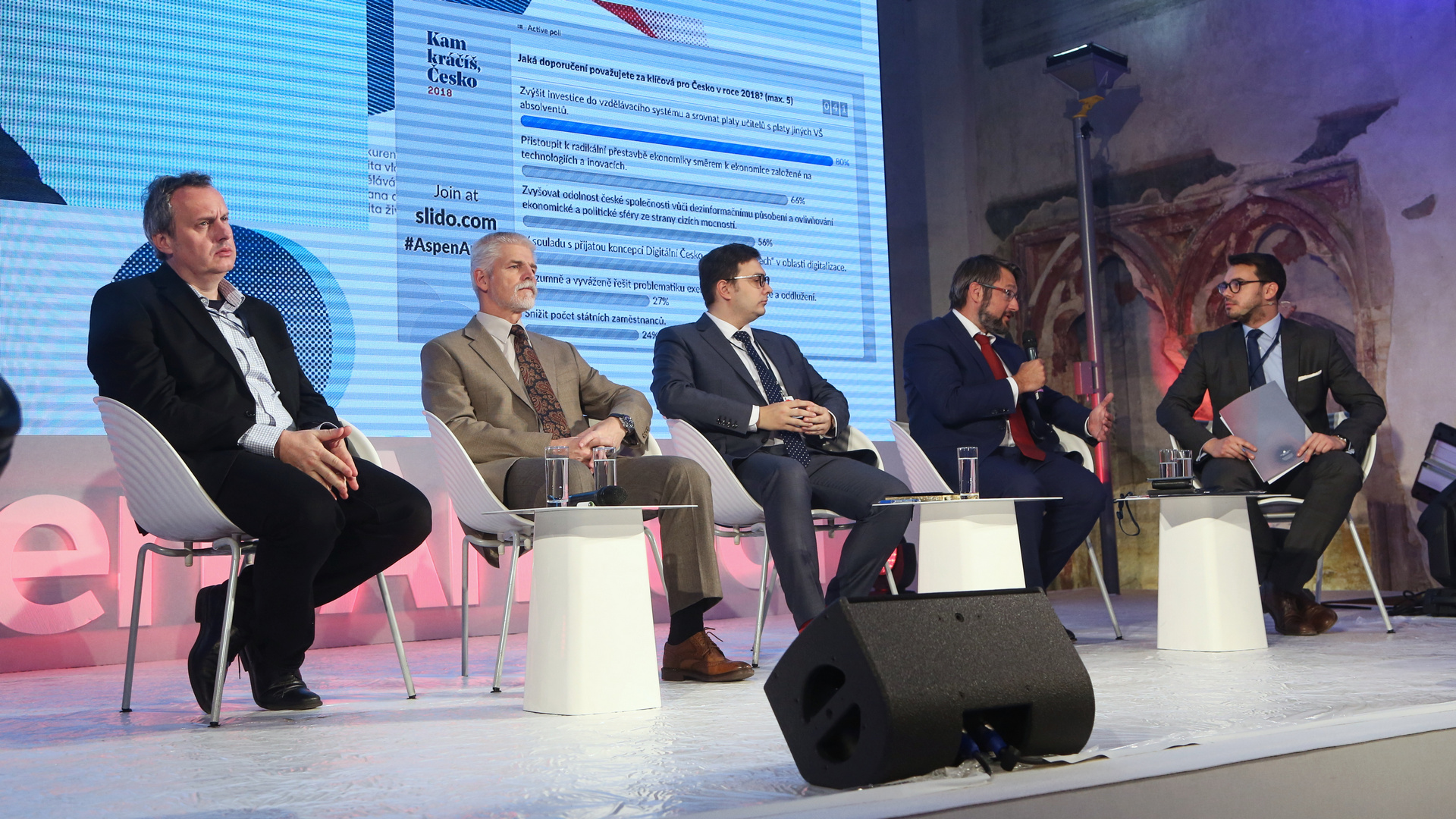 The speakers agreed that there is a persisting lack of money invested in national defenses and that systems of procurement are also extremely challenging. A debate on the threats that the Czech Republic faces at present came to the conclusion that the non-military steps of the Russian Federation can have far more serious implications than open military conflict. The discussion further emphasized the importance of correctly identifying threats in order to efficiently distribute financial resources to certain areas, such as cyber security. The discussion continued with a debate on the project of a European army and that it is extremely irresponsible and irrelevant to discuss a future platform that might potentially become a competitor to NATO given the current circumstances.

The last panel was dedicated to Quality of Life in the Czech Republic. Daniel Prokop (Median) prepared with his team an analysis linking the different levels of quality of life with different modes of political behavior. The panel consisting of Jana Maláčová (Minister of Labor and Social Affairs), Vít Rakušan (Mayor of Kolín) and Melinda Miklós (We Are Open) elaborated on the prospects of erasing the great inequalities in quality of life, both between and within regions and districts.

The panelists analyzed key issues that have significant impacts on regional inequality, placing an emphasis on equal opportunity, quality of education, infrastructure, investments into so-called soft skills or the importance of focusing on debt relief solutions. The need for an individual approach to each region was expressed by the speakers throughout the entire debate.

There is an increasing demand for building open and diverse companies in Hungary as well as in other CEE countries. Melinda Miklós at #AspenAnnual #qualityoflife

Assistance could be provided by defining the minimal standard. This panel then covered the topic of low fertility rates and an aging population, arguing that investments into retirement homes are indispensable in the foreseeable future. The panel also expressed concerns about the difficulty to combine family life with work life, this being the reason whey there is a need to focus on pre-school services and benefits for families. Allowing for participation in city life, also beyond elections, could also be a remedy. Every inhabitant needs to feel that there is something happening in the community so as to build upon the desire to actively participate in the city.

Zdeněk Tůma (KPMG) and Ivan Hodáč (Aspen Institute CE) summarized the final recommendations and evaluated the outputs of the conference, during which almost all the panels made mention of distraints, obsolescence of education and the inflexible state administration as the biggest problems for the development of the Czech Republic. They also revealed the results of the sli.do poll in which the conference participants voted on what steps should be taken in the first place in the future. The most votes were received by “an increase in investment in the education system and an equal level of teachers’ salaries with the salaries of other graduates”. 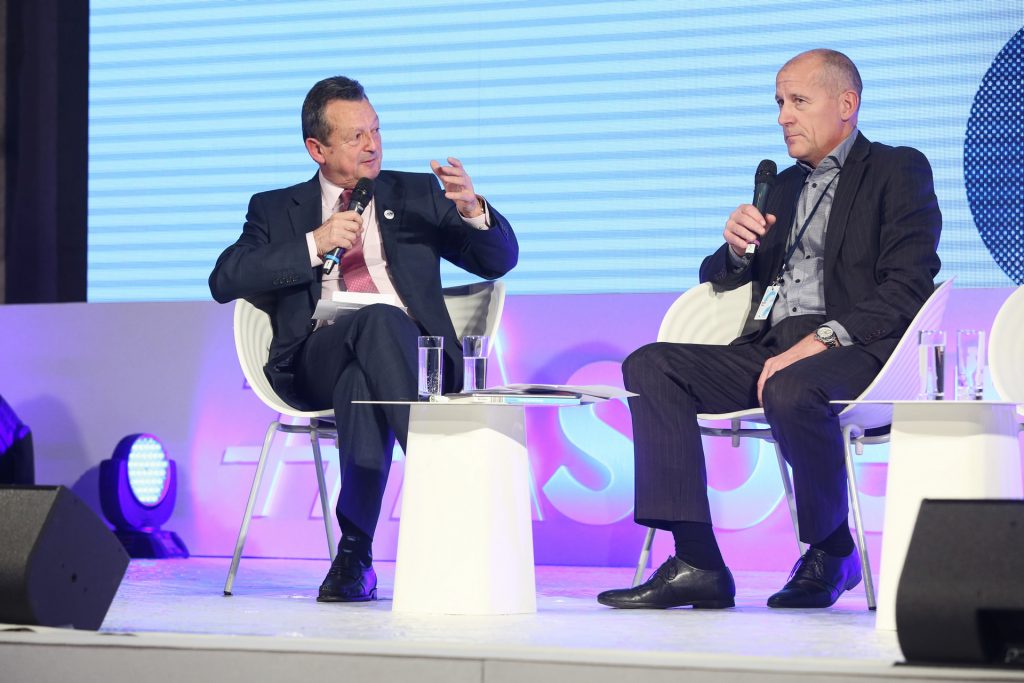 A gala dinner was held at the end of the day at the Trade Fair Palace. At this ceremony, Aspen Institute CE announced the Aspen Prague Award 2018 to Senator John Sidney McCain III in memoriam for his understanding and support for the path towards democracy of the nations of Central and Eastern Europe, and for helping strengthen the region’s position in the world after the fall of the Iron Curtain. Cindy McCain subsequently expressed thanks for the award in a video greeting. The main guest of the evening was Timothy Snyder, Professor of History at Yale University (Richard C. Levin) and the Institute of Humanities in Vienna with a speech entitled “Central Europe: Memory or History?”.

What an inspirational evening with @TimothyDSnyder and @DanPorterfield as guest speakers at annual conference of @AspenInstCE. We at ABB 🇨🇿 are proud to support the Aspen Institute in the CEE region. pic.twitter.com/VXWx9cOBti